0
by annece in Non classé

Google and Harvard researchers have a new 3D map of part of the human brain that includes 50,000 cells and 130M synaptic connections. The 1.4 petabyte image covers just one cubic millimeter of brain tissue (one millionth of a typical 1200 cc brain!) and was created by ML reassembly of 30nm-thick slices imaged by electron microscopy. Scientists anticipate the image will take years to analyze. One noted finding: “Normally, when a tendril from one neuron passed close to another, it would form just one synapse, or more rarely two to four. But there were also some tendrils that formed up to 20 synapses onto one target neuron, meaning this tendril by itself would probably be able to trigger that neuron to fire. It isn’t clear why, but [lead researcher] Lichtman speculates that the multi-synapse connections underlie learned behaviours. ‘There’s lots of things your brain does by cognition, by thinking and puzzling it out and making a decision, and there are many things you do automatically that could not have come genetically,’ he says, such as braking when you see a red light. The super-strong connections would allow a message to pass swiftly through the network.” 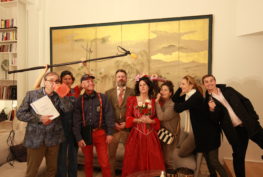